As much as we adore the likes of Belle Époque, Art Nouveau and Art Deco posters, we do manage to spare enough space in our hearts (and in the gallery) for contemporary design. And, indeed, space was needed for the newest addition to L’Affichiste’s collection!

This latest acquisition is an intriguing set of posters that date back to 1989, the bicentennial of the French Revolution. As part of the year-round commemorations of the events of 1789, a large group of prominent international artists and designers was invited to create original posters that would portray their own personal take on the broad theme of Human Rights. Why Human Rights? Because the 1789 Revolution coincided with the issue of the Declaration of the Rights of Man and the Citizen, an important human civil rights document which, combined with Magna Carta (1215), the English Bill of Rights (1689), the United States Declaration of Independence (1776) and the United States Bill of Rights (1791), greatly inspired the 1948 United Nations Universal Declaration of Human Rights.

The project took on the name Artis 89 Images Internationales pour les Droits de l’Homme et du Citoyen (or International Images for the Rights of Man and the Citizen) and was self-described as such:

“The World and the declaration of the rights of man. The declaration of the rights of man in the world. These two ideas have given birth to this poster exhibition commemorating the bi-centenary of the French Revolution – a project also inspired by the Warsaw biennale which, since its creation in 1966, has been a melting-pot of social and cultural images. Having involved 66 contemporary artists in this project, we asked them to express, from their own cultural viewpoint, the power of the concept of human rights. Our commitment was to promote their freedom of expression through the execution of this project. Several hundred copies of this event have been distributed and will be shown simultaneously around the world. Carried by this wave, other creators, researchers and participants on the struggle for human rights have contributed to the bilingual book accompanying the exhibition. “FOR HUMAN RIGHTS, histories, images and voices” brings together texts, reports and thoughts on this common denominator: LIBERTY. We are proud to present this artistic and intellectual creation, this blend of hope and lucidity which is our modest contribution to the commemoration of bi-centenary. We invite you to share it with us, to help further its ideals.”

The resulting 66 posters display an extraordinarily eclectic range of artwork by some of the biggest names of the time (Milton Glaser, Saul Bass, Tomi Ungerer, Waldemar Świerzy, Raymond Savignac, etc.). They showcase each designer’s unique approach to such a heavy subject matter and to the art of design itself.
Researching each poster has been a fascinating lesson in design as well as in history! For example, I was not familiar with the 1988 hostage crisis in Ouvéa, that inspired Michel Quarez’s contribution:

30 years later, human rights still have quite some ways to go, including here in our good old Canada, but at least the posters have found their way to l’Affichiste… Bright side, right?

Of course, when such a set of posters arrives at the gallery, it’s hard not to choose some favorites. And who better to judge the work of a quasi-exclusively male group of artists than an all-women team of galleristas? No one, that’s who! So here are our staff picks: 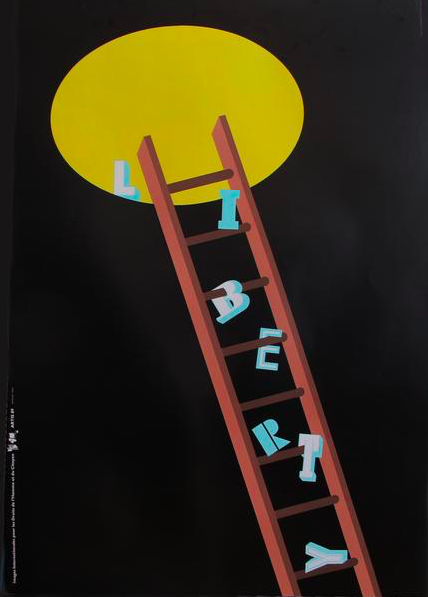 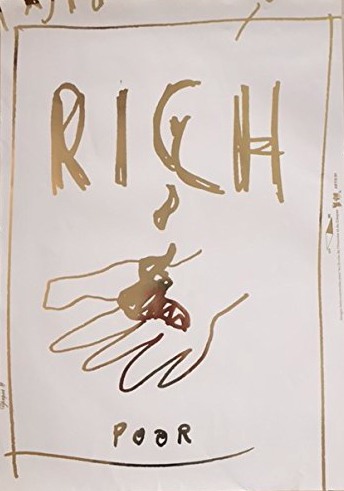 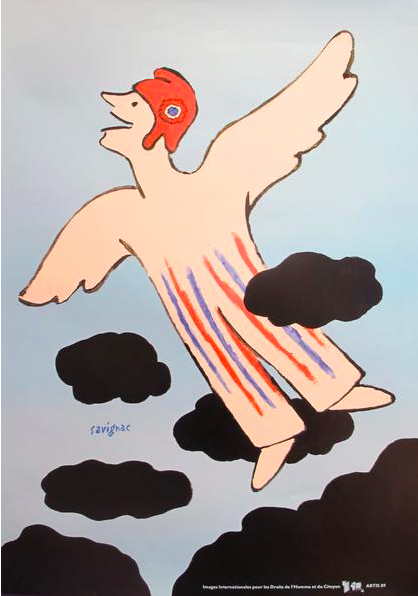 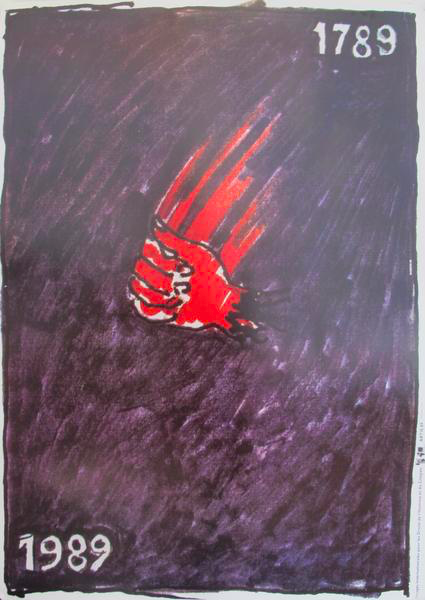 Do you have a personal favourite? We would love to hear about it!