Robert Redford, Brooks Brothers and Stephen Colbert, or Why I love parties where you can smoke and drink

As I recently wrote on Facebook, I am old enough (yes, yes I know – I don’t look a day over 35) to have seen, and loved, the original Great Gatsby with a handsome, no dashing, Robert Redford. I was never a huge Mia Farrow fan, but Robert Redford … 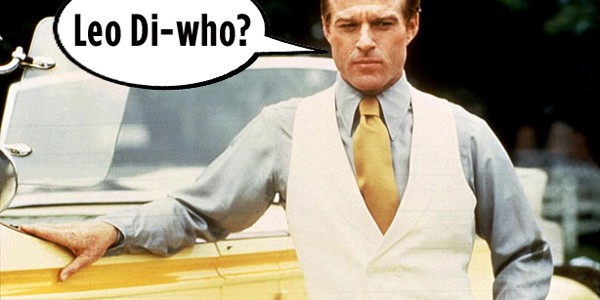 With everyone (including Stephen Colbert ), talking about this classic American novel, and with the film set to premiere this week, we’re feeling kind of Gatsby-ish ourselves.

We’d like to go to a party where you could grab a drink from a fountain of champagne glasses, swing your waist-length strand of pearls and then go cool down in the fountain. (If you wanted to drink something other than Champagne, you could try one of these Gatsby-inspired libations)

I haven’t yet seen the new Gatsby, but if the advance press is to be believed, it is not quite as … subtle as it’s predecessor. You can read a review of the movie here.

There are even folks who don’t like the book (Why I despise the Great Gatsby”), although others call it a classic of American literature. When I taught a course on poster history, I picked Gatsby as the quintessential Art Deco novel and was shocked to discover that it was no longer on most college reading lists… horrors!

I love the idea of men wearing hats (and doffing them in the presence of ladies, of course) and suits, bowties… There are whole sections of Pinterest which now feature Gatsby-esque clothing and Brooks Brothers (which has HUGE product placement in the film) has come out with a remarkably expensive collection of haberdashery that is inspired by (and featured in) the film. As for me, I think the cigarette-smoking gypsy woman would keep Jay Gatsby interested for at least the length of an evening…

(In case you’d like to hear a bit of Jay Z’s take on Art Deco music, here’s a sampler of music from the film)