Vittorio Fiorucci – vintage toys, the mind of an artist, and posters.

We recently acquired a treasure-trove of posters (some hand-signed) by one of Quebec’s best known poster designers, Vittorio Fiorucci.

Fiorucci was a man of fiery temperament who – at least in Montreal – is best known for some logo work he did for our beloved Just for Laughs festival. According to Wikipedia, Fiorucci “was born on 2 November 1932 in Zara (Italy). During World War Two when Zara was about to be captured by Yugoslavia, Fiorucci and his family fled to Venice, Italy, where he subsequently spent most of his childhood before coming to Canada in 1951. By 1960, he was an established artist and by 1980 was one of the most renowned poster designers in the world. Fiorucci
was awarded a Moebius Award at the 1998 International Advertising Awards of Chicago, and lifetime achievement awards from the Canadian
Association of Photographers and Illustrators and the Institute of Design Montréal. Fiorucci worked in a variety of mediums: he did illustration works for magazines (including the film magazine Take One), children’s books, animation, and was an established photographer who was exhibited in 1958 at George Eastman House’s International Exhibition of the World’s Greatest Photographers.

His work was used to promote many of the films that marked the beginning of independent Québécois cinema, and appeared in a variety of
magazines – including Time. He created the logo for the Le Château chain of clothing stores, and the green mascot Victor of the Just For Laughs festival. He died from a stroke on July 30, 2008.” 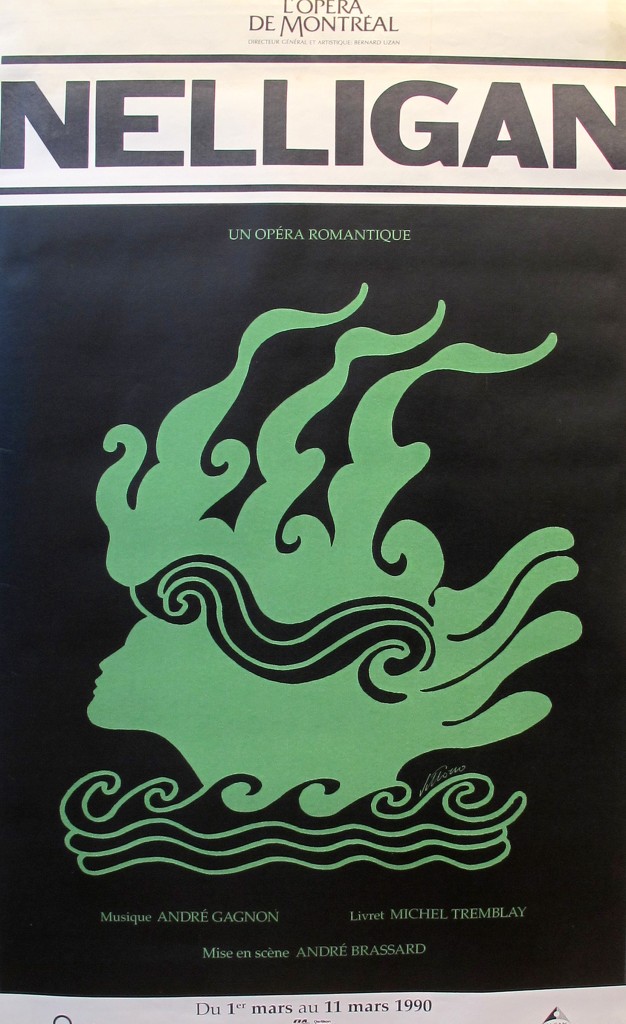 Shortly after I opened L’Affichiste, I was contacted by the woman who lived with Vittorio in the years before his death. She was interested in finding a home for his posters, maquettes and ephemera, and she asked if I would come to her apartment to see if I could help her place these items. From our conversation, it wasn’t clear to me if she wanted to sell these items or donate them to a museum. I decided to meet her and, because she lived in a part of town I didn’t know very well, I brought a friend along.

It was clear, from the moment she opened the door, that this woman was still in the grieving process that follows the death of a well-loved
companion. She spoke of her lover in terms that made it obvious that their relationship was stormy, tumultuous, and passionate. Her musings, accompanied by wisps of cigarette smoke and the mewling of innumerable cats, made it seem almost as if we had entered a movie set … and what a set it was: every wall was covered from floor to ceiling with shelves, and every shelf was laden with mechanical toys. Vintage coin operated toys, antique Mickey Mouse toys, intricate and detailed tin and metal toys, toys of every shape and size. There were thousands of objects, each meticulously placed in a space of its own, some behind glass, others not. Used – most likely – as inspiration, the sheer size of the collection could have warranted a coffee-table book, a travelling exhibition, or both. It was like we had physically entered the working brain of an artist and were getting a birds-eye view of the items the made up his atelier.

Enormous framed posters, some hung on the walls and others stacked against them, dominated a second, smaller room. Here were the
maquettes and printed ephemera that had ostensibly been the reason for our visit. Vittorio was inspired by artists like Leonetto Cappiello and Sergio Ruffolo, and his posters, while clearly eponymous, had small tributes of recognition to these posterists, either in the use of a particular color or the integration of a specific font.

It was breathtaking to see so many spectacular pieces in one place, but the room was small and the ghost of its owner was notable. His widow was bereft, and, it turned out, her desire was not to sell anything, but to ensure that her husband’s work received the recognition that she felt it deserved.

We stayed as long as was polite, and left, a little shaken and sad, but uplifted too: Vittorio’s work, with it’s irreverence, its vibrant use of color and it’s unmistakable whiff of irony, reminded us that great posters have the power to comfort us and make us smile, long after the artists who created them have themselves lost the ability to do so.

Vittorio’s posters are collected by individuals and institutions around the world. They are colorful, affordable, and speak well to the aesthetic of the time in which they were produced. I think it’s perfectly fitting that they are featured with pride of place in Montreal’s only vintage poster gallery, which, as it turns out, is just up the street from where Mr. Fiorucci used to live.

I think he would have appreciated the irony of that fact, just as I do. (Here is a video of one of the last exhibitions done during Vittorio’s lifetime)