Naughtiness, Shamelessness and another Party I wasn’t invited to…

While every generation likes to think that it invented naughtiness (I do love that word), the truth is naughtiness has been around for a very, very long time. And while the French didn’t create illicit behavior, I think they have always celebrated it with perhaps the most savoir faire and panache.

In the very early 1900’s there were a series of balls put on by the 4’Z’Arts Association (the four arts being architecture, painting, sculpture and engraving). The first Ball was held in 1892, and participants were encouraged to be as debauched as possible. In 1893 the Ball took place at the famous Moulin Rouge, where some artists improvised a slow striptease to music, thus inventing the striptease. (I can’t show you a striptease, but I can show you a very sexy tango from a modern interpretation of Moulin Rouge here).

The so-called ‘shamelessness’ (a new favourite word) of the event led the general population to deplore the Balls, but they were some of the most anticipated events of the Parisian social season. Women danced together, with abandon, (like this I presume) and all sorts of merriment prevailed.

The invitations to these events were scandalous in and of themselves – small cards that displayed naked breasts and buttocks and hints of the revelry the night would encompass. We’ve procured an entire collection of them (you can see them on our site, laffichiste.com), and although they are very risqué, we love them.

I found a contemporary description of the ball and thought I’d add it here. Makes for interesting reading …

“Ah! ah! vive les Quat’z’ Arts! Au Moulin Rouge — en route!” wildly rang through the lamplit streets of Paris as cab after cab and bus after bus went thundering across town toward Montmartre, heavily freighted with brilliantly costumed revellers of les Quat’z’ Arts. Parisians ran from their dinner-tables to the windows and balconies, blasé boulevardiers paused in their evening stroll or looked up from their papers at the café-tables, waiters and swearing cabbies and yelling newsboys stopped in the midst of their various duties, and all knowingly shook their heads, “Ah, ce sont les Quat’z’ Arts!” 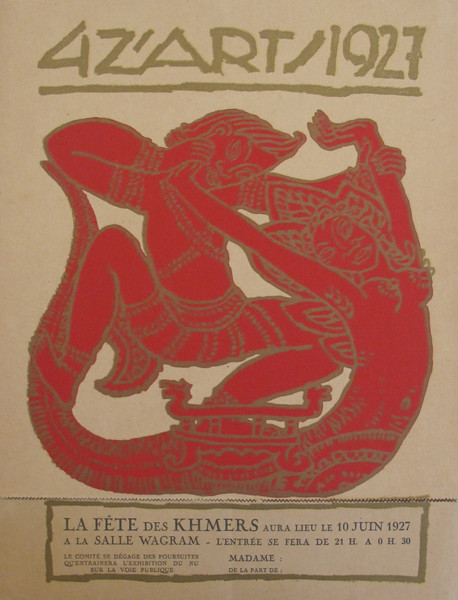 For tonight was the great annual ball of the artists, when all artistic Paris crawls from its mysterious depths to revel in a splendid carnival possible only to the arts. Every spring, after the pictures have been sent to the Salon, and before the students have scattered for the summer vacation, the artists of Paris and the members of all the ateliers of the four arts — painting, sculpture, architecture, and engraving — combine their forces in producing a spectacle of regal splendor, seen nowhere else in the world; and long are the weeks and hard the work and vast the ingenuity devoted to preparations,— the designing of costumes and the building of gorgeous floats.

During the last three weeks the élèves of the Atelier Gérôme abandoned their studies, forgot all about the concours and the Prix de Rome, and devoted all their energies to the construction of a colossal figure of Gérôme’s great war goddess, “Bellona.” It was a huge task, but the students worked it out with a will. Yards of sackcloth, rags, old coats, paint rags, besides pine timbers, broken easels and stools, endless wire and rope, went into the making of the goddess’s frame, and this was covered with plaster of Paris dexterously molded into shape. Then it was properly tinted and painted and mounted on a chariot of gold. A Grecian frieze of galloping horses, mounted, the clever work of Siffert, was emblazoned on the sides of the chariot. And what a wreck the atelier was after all was finished! Sacré nom d’un chien! How the gardiens must have sworn when cleaning-day came round!

The ateliers in the École are all rivals, and each had been secretly preparing its coup with which to capture the grand prix at the bal.

The great day came at last. The students of our atelier were perfectly satisfied with their handiwork, and the massier made all happy by ordering a retreat.” (You can read more here.)

I think I would have liked to be a fly on the wall. Or maybe on the dance floor…