The Hans Sachs Collection, Up Close and Very Personal

In 1937 Josef Goebbels, the Nazi’s art expert, seized the 12,000 piece collection of Dr. Hans Sachs, a Jewish poster collector in Berlin. Goebbels knew that Sachs, through his close friendships with some of the most important Viennese and Berlin poster designers, had acquired pieces that no one else in the world owned. Klimt, Mucha, Moos, Hohlwein, Deutsch, Klinger, Bernhard – these artists all counted Sachs as a personal friend, and as friends often do, they had gifted him with some of their favorite and most important pieces.

Detail from two Deutsch posters in the Sachs collection

Goebbels considered himself a connoisseur of the finer things in life, and he instinctively appreciated the value and rarity of the Sachs collection. His intention was to create a museum dedicated to poster art, using the Sachs collection as the cornerstone for its collection. Goebbels packed up all 12,000 posters and stored them away from harm in a bunker in Berlin. For good measure,  he shipped Sachs off to the Sachshausen concentration camp.

Detail from two posters by Mucha

If you read this blog, you’ll know that Sachs survived the war. Dr. Sachs was paid $50.000 by the German government for a collection that was presumed lost. Sachs died without ever learning that his collection – although reduced by two-thirds – had been housed in the Berlin Historical museum since 1945.

Detail from two Hohlwein posters in the Sachs collection

In our last post we described how Peter Sachs, Hans’ son, managed to have the collection returned to him. We mentioned that we had been in contact with Peter Sachs’ law firm, and how, through them, we were granted the opportunity to view the collection before it goes to auction in January 2013.  And so it was that Kristina, the L’Affichiste gallery director, and I headed off to New York early on Sunday morning.

In a room-sized storage unit in a secure building on 110th Street and First Avenue in the heart of Harlem, three dedicated young women are sorting through was remains of the Sachs Collection. Now numbering 4,000 pieces  (the others having been lost, stolen or destroyed during the intervening 70 years), the collection still includes some of world’s rarest, most valuable and astonishingly magnificent posters. Each poster still has, on its reverse, Hans Sachs original inventory sticker – with his name cavalierly crossed out, or stickered over with a sticker from the Berlin Historical Museum.

I have to admit that I was overcome by emotions: sadness, exhilaration, awe … here, in the most unlikely place, was some of the most important ephemera to have survived the war. There were so many images, so many posters, so much social and graphic history, that it was almost impossible to absorb. Kristina and I focused on the Julius Klinger posters, for it is his posters we are hoping to use in an exhibition. But because we knew that we might never again have the opportunity to see some of these posters, we began snapping images of other pieces… 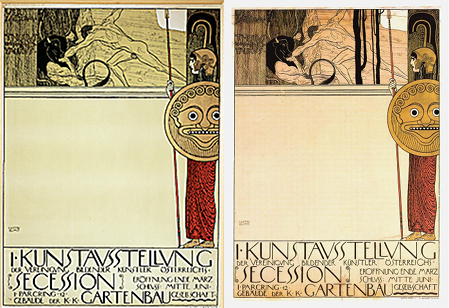 Take for instance, the poster on the left. One of Gustav Klimt’s most important and best-known posters, it was created in 1898 for the first Secession Exhibition in Vienna. Considered to be scandalous for its depiction of male nudity, Klimt was ordered to alter the poster so that it could be shown in public. There are only a handful of the uncensored versions left in circulation. One of them is in the Sachs collection. It is in pristine condition.

I left New York reluctantly. After two days, we had seen just a fraction of the collection – but it was time to return home. We have much work to do if the exhibition is to happen, and I still need to get my book about Julius Klinger off to the book designer and then the publisher. But I was so fulfilled, and grateful to have seen what I saw in the time I was there. The collection inspired me, and reminded me why I fell in love with posters in the first place: because they are beautiful and timeless, and because they say so very much about the people who collect them.