This month on posterromance I thought it would be a good idea to focus on what we call iconic and classic posters. For me, these are timeless pieces – not necessarily the most expensive posters we have in the L’Affichiste collection, but posters which speak to a particular era, or social movement, or which feature an element of design that is particular and noteworthy. 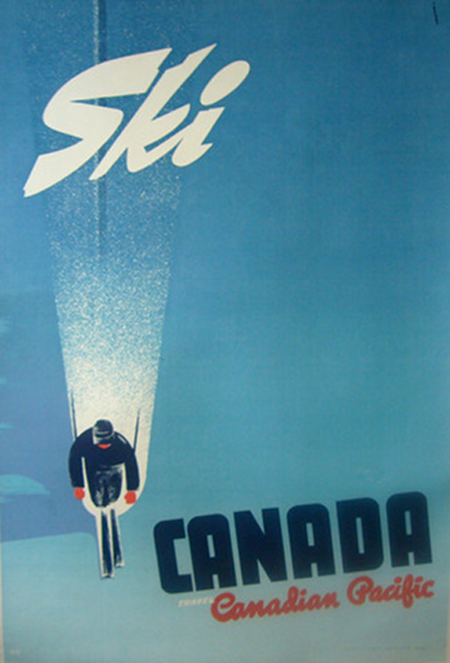 Because we generally start out the month with a top ten list, here is my (completely personal) list of our top ten iconic posters:

Canadian Pacific posters are highly collectible, and in particular, those by Peter Ewart. Ewart was born on April 7th, 1918, in Kisbey, Saskatchewan, but grew up in Montreal where his family moved when he was a small child. Upon completion of his formal education, he studied art in Montreal, and later in New York. WWII interluded these studies and it was during his service in the military that he was stationed for a time in British Columbia. He decided that after his discharge he would return to live and work in the province that has so impressed him with the variety and beauty of its scenery. His paintings have been exhibited by the Royal Academy (London, England), the Royal Canadian Academy, The Canadian National Exhibition, and the Mid-Century Exposition of Canadian Paintings. He has had over 40 one man exhibitions and his paintings are represented in numerous corporate and private collections in Canada and abroad. In his commercial work, Ewart was known for his dynamic designs and illustrations that caught the eye and inspired the imagination. During the 1940s and 1950s, he became one of Canadian Pacific’s major artistic contributors. These travel posters were displayed throughout the country and abroad as part of a long- lasting and highly effective campaign.

Jules Chéret is considered the father of the modern poster. Born in Paris, he studied lithography, which was, at that time, a new, more economical method of reproducing colored designs. His sense of design, his free-hand style, and his ability to smoothly incorporate written messages into his pictures were skills that combined to produce posters that attracted immediate attention and interest. Chéret’s posters contained an unusually large amount of lettering, which brought the advertising component of his designs into prominence. Cheret revolutionized the field of advertising by his contributions in design and printing techniques. He designed over 1000 posters. This would later reveal him to be The Master of the Poster. 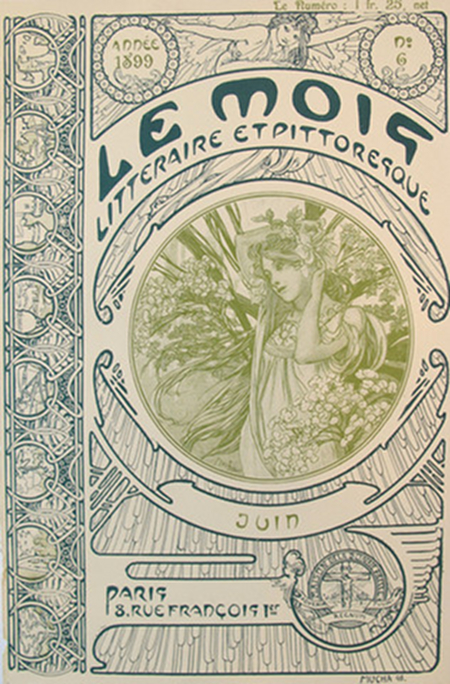 What can we say which hasn’t already been said about the genius of Mucha? Alphonse Maria Mucha (1860-1939) is most often remembered for the prominent role he played in shaping the aesthetics of French Art Nouveau at the turn of the century. As a struggling and relatively unknown artist of Czech origin living in Paris, Mucha achieved immediate fame when, in December 1894, he accepted a commission to create a poster for one of the greatest actresses of this time, Sarah Bernhardt. Though the printer was apprehensive about submitting Mucha´s final design because of its new unconventional style, Bernhardt loved it and so did the public. ´Le style Mucha´, as Art Nouveau was known in its earliest days, was born. The success of that first poster brought a 6 years contract between Bernhardt and Mucha and in the following years his work for her and others included costumes and stage decorations, designs for magazines and book covers, jewellery and furniture and numerous posters. Mucha was much sought after by both private and public clients, and he produced many magazine covers and illustrations, like this one for the Le Mois. 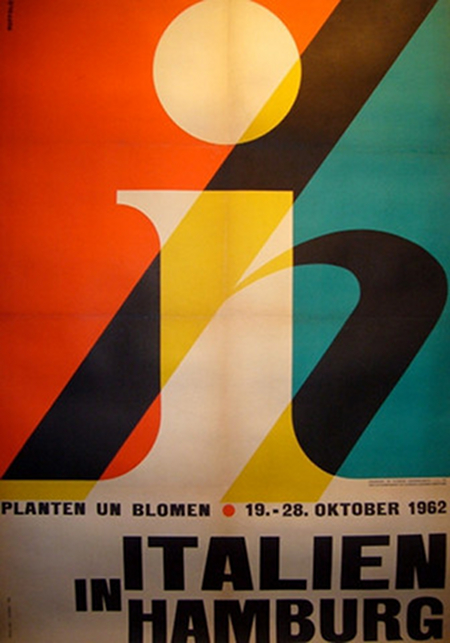 Kristina loves this poster, and so do I. It’s graphic, it’s full of colour, and its simple and refined. Sergio Ruffolo (1916-1989) was one of the greatest pioneers and artists of Italian Modernist graphic design. He studied law, enrolled in the Italian Resistance during WWII, was arrested and taken prisoner by the Gestapo but managed to survive and go on to become one of Italy’s best loved and most cherished national graphic design treasures. Ruffolo’s influence as a mid-century artist can not be overstated – his color-blocking techniques can be seen throughout the design world almost immediately after he began using it, and this poster, which was produced for an exhibition of Ruffolo’s works that was held in Hamburg in 1962 is a testament to the skill, the vision, and the beauty of a man who’s talent was both limitless and timeless. 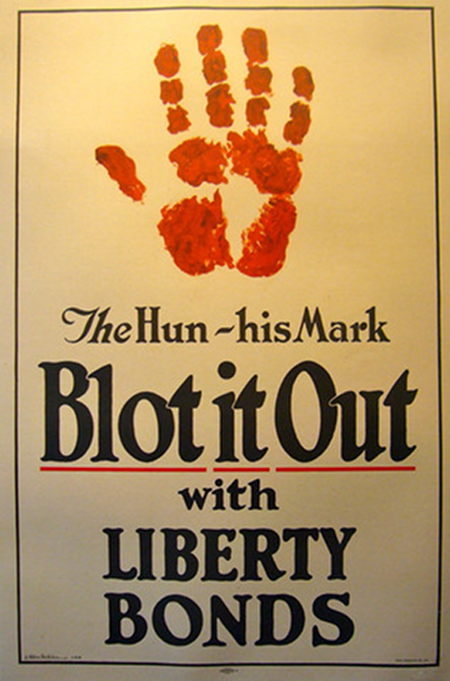 5.  Blot it Out with Liberty Bonds/Anonymous

Talk about effective graphic design! Issued by the United States Government Printing Office, this poster is evidence of the ‘less is more’ theory. When this poster was on display at the Smithsonian Museum in Washington DC, the catalog read (in part) “A large, bloody handprint in a poster on display, “The Hun – His Mark, Blot it Out with Liberty Bonds” (1917), represents the first time the Hun was referenced in a U.S. Liberty Loan poster.” According to firstworldwar.com, “‘Hun’ was a derogatory nickname used primarily by the British and Americans – officers rather than men – during the First World War to describe the German Army, e.g. “the Huns attacked at dawn”.

Everyone is entitled to their 15 minutes of fame – unless you’re Andy Warhol, who seems to have an unlimited number of famous minutes… Andy Warhol (August 6, 1928 – February 22, 1987) was an American artist who was a leading figure in the visual art movement known as Pop Art. His works explore the relationship between artistic expression, celebrity culture and advertisement that flourished by the 1960s. Warhol’s artwork ranged in many forms of media that include hand drawing, painting,printmaking, photography, silk screening, sculpture, film, and music. From the autumn of 1962 onwards, Warhol’s paintings were made almost exclusively by screen-printing photographic images on to coloured backgrounds. These works were executed with the help of assistants in the studio that he called ‘The Factory’.

It seems that everyone knows the name of Henri de Toulouse Lautrec. This funny little man with the misshapen legs and a face that some said could stop traffic, was so prolific and so talented that he has almost become synonymous with Belle Epoque Paris. This plate, which was restruck in the late 1970s from the original lithographic plates – which were then destroyed – is testament to the masters skill: character defects which other artists might mock are treated with love and admiration… this older couple (a couple of ancient butterflies, according to the title of the piece) are shown in love, canoodling, and just as they are.

8. No top 10 vintage poster list would be complete without at least one Cappiello. This is not one of his better-known works, but to me, it exudes the confidence of an artist who is comfortable with colour, with movement, and above all, with women. Fab.

9. Publicite Sauvage is a Montreal-based poster house in the truest sense of the word: Founded in the 1980s by Baudoin Wart, the ad agency Publicite Sauvage recently celebrated its twenty-fifth anniversary. The organization has always remained faithful to its original mandate of providing effective and high impact visibility (at low costs!) to cultural institutions and events around the city. In 25 years, the company has grown from three to over 30 employees and its fleet of trucks can be seen around the streets of Montreal every day. Publicite Sauvage has remained true to both the clients and artists they represent. 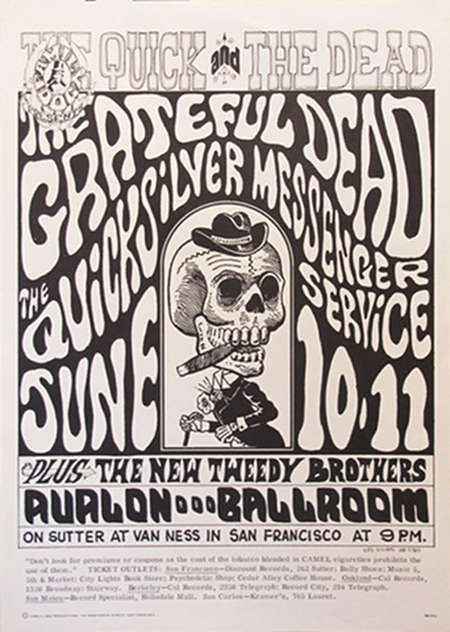 And last but not least, a rock poster from the groovy sixities… perhaps not in the class of Toulouse and Cappiello but classic in its own genre.