Shortly after I opened the gallery, I received a phone call that went something
like this:

“L’Affichiste, bonjour… (In Montreal we are never quite sure if the person calling
will be French or English speaking, so bonjour is generally the safest way to
answer the phone.)
“Yes, hello. Do you buy posters?”
“Well, generally I try to sell posters. Sometimes I buy them, to sell. Did you have
some posters you wanted to sell?”
“Yes.”
Long pause…
“OK, well why don’t you bring them to the gallery and I can look at them here.”
“Oh, no. I can’t do that. I work during the week and the posters are stored in an
industrial building. You’ll have to come see them on the weekend.”

I don’t know about you, but when some strange man tells you that you have to meet him in an otherwise abandoned-for-the-weekend industrial building, the hair on the back of my neck stands up. Too many stories from my grandmother echoed in the back of my head (she used to collect those National Enquirer-type “Man hacks neighbor into little pieces and plants him in the front lawn” kinds of tidbits), so at the appointed date and time I brought my friend Paula with me to see this strange and unknown man and his strange and unknown posters. 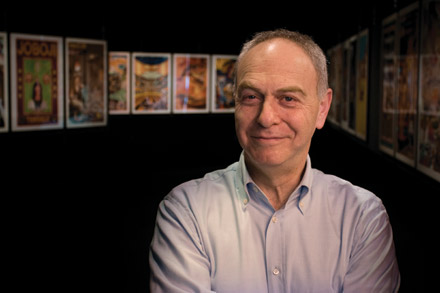 He arrived in a powder blue Jaguar. I began to think that maybe he wasn’t an ax murderer. Turns out that the gentleman (and he is quite the refined European) was none other than Marc Choko, a very distinguished poster expert who has taught at the University of Quebec in Montreal for many years (in both the graphic and urban design departments); has put together world-class poster exhibitions which have traveled the world; and has commissioned posters from and by some of the best
contemporary poster designers.

Marc knows more about posters than I would ever hope to learn. He has written many books – some of which we sell here in the gallery, has taught THE poster course at UQAM for decades, and has become a friend.

We laugh together about the day we met and my fears that he was a French version of Jack the Ripper. Nothing could be farther from the reality. However, if a strange man calls and wants to meet me in an abandoned meeting on the weekend, chances are I am not going to arrive alone.
You never know – maybe my grandmother was on to something.